5 Modern Advancements of the Police Cruiser

Fighting crime is one of our society’s oldest and most noble professions . It’s also one that has dramatically evolved over the years, staying on the cutting-edge of technology and using the latest tools to get the job done.

The introduction of the first police car in Akron, Ohio in 1899 was a game-changer for the crime-fighting industry. The 8hp, battery-run vehicle was produced by the Collins Buddy Company and cost the city $2,400 – the equivalent of $65,000 in 2018. 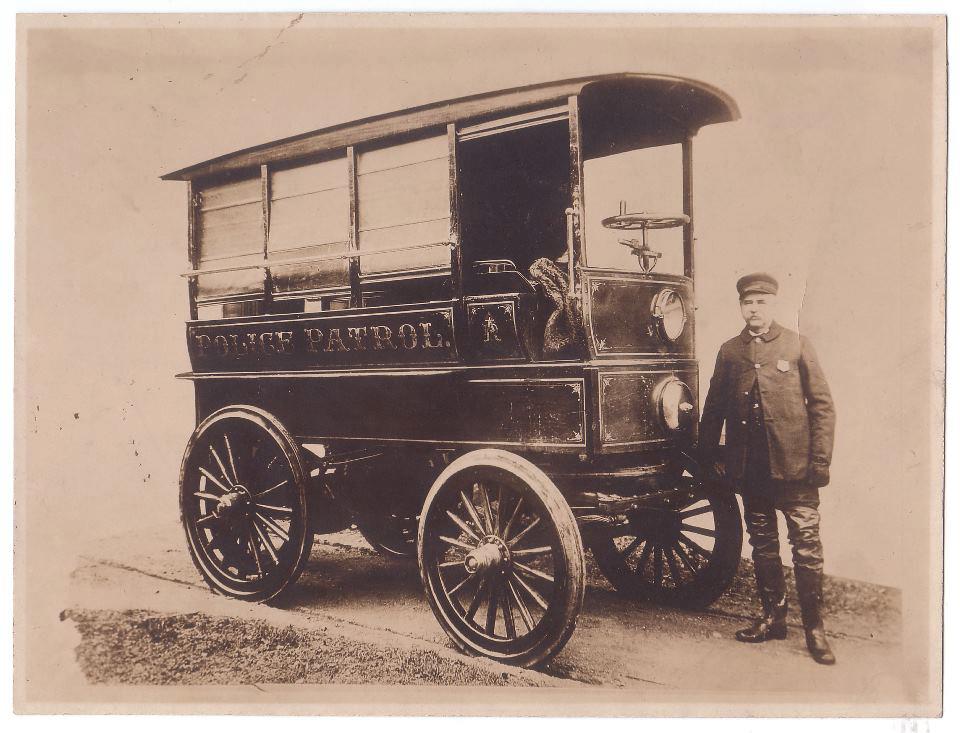 The 5,000-pound “paddy wagon” was equipped with headlights, a gong (which was used before the invention of the siren), and a cell in the back for prisoners. It could reach speeds of 18 mph and drive as many as 30 miles at a time on a fully charged battery. Its first assignment was to pick up a drunk man who was causing trouble on Main Street.

These vehicles have come a long way since then. Just over a century later, police cruisers that can reach speeds of 150 mph and get as many as 40 mpg are being used all over the United States. And that’s just the beginning.

Here are five of the biggest advancements found in the modern police cruiser.

Tracking license plates used to be like trying to find a needle in a haystack. Now, with automated license plate readers (ALPRs), officers can find vehicles of interest by just driving through a parking lot or sitting at an intersection. ALPRs are high-speed, computer operated camera systems that are attached to modern police squad cars. Similar technology is also found at intersections and highway overpasses. 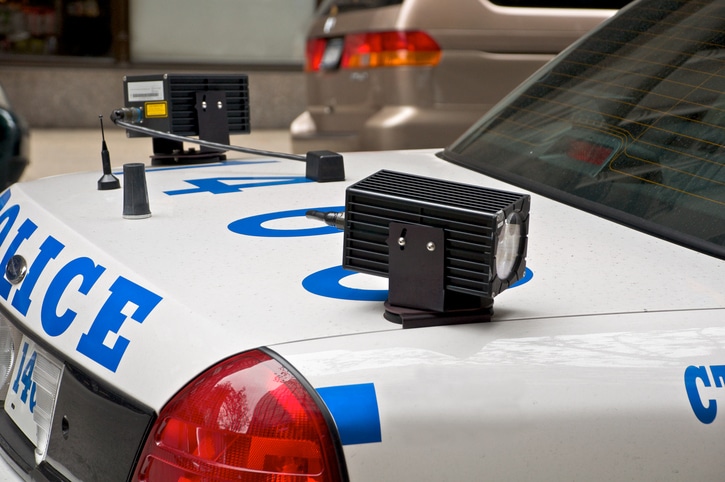 An ALPR system automatically takes pictures of every license plate the squad car passes, while also recording the location, date and time of the photo. The images are transformed into alphanumeric characters the computer compares to plate numbers listed in a database of vehicles police are interested in. ALPRs will also capture pictures of the vehicle, and sometimes, its drivers and passengers. All the data is uploaded to a central server, which then can be shared on other police databases.

All this happens in seconds, and the ALPR will alert the officer almost immediately when a wanted plate is spotted. These ALPRs can help law enforcement find vehicles that have been reported stolen, are suspected in criminal or terrorist activities, or aren’t registered or insured, among other things.

4) Doors that can stop armor-piercing bullets

One of the most popular law enforcement vehicles out there is the cop-spec Ford Explorer, known as the Interceptor Utility, and it has doors that stop armor-piercing bullets.

The new Type IV panels can also withstand shots from pistols, rifles, and shotguns. These panels are the first to meet the Justice Department’s highest standard for body armor, which is the equivalent of a thick SWAT team vest.

The doors are basically made up by two layers. The outside is made of ballistic tile that breaks up incoming bullets, and below that is a layer of aramid fiber – a resilient polymer used in Kevlar vests – that prevents shrapnel from making it into the passenger cab. These doors are so strong they will stop a .30-calibre bullet shot from an AK-47.

The upgrade is available for about $1,500 a door. However, it isn’t available to the public. In fact, the doors are destroyed when police cars are scrapped so they can’t be used by criminals.

Police used to have to call into the station with phones that were set up at street corners and highways. 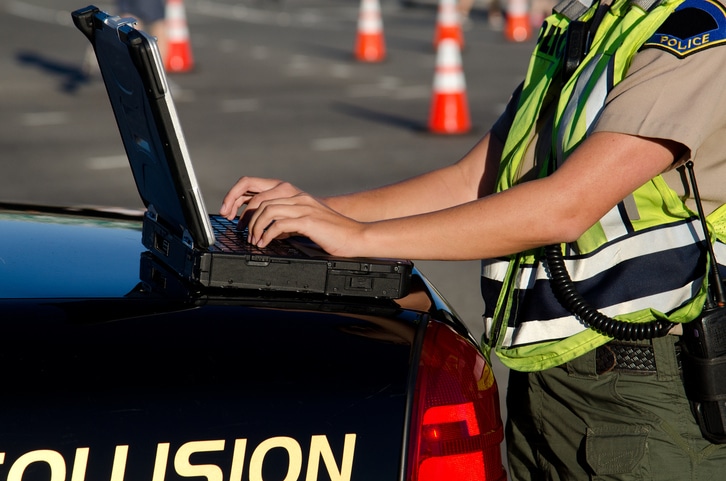 Officers on patrol now have access to all the information they need to do their jobs without having to rely on dispatch. Thanks to an advanced onboard computer that is always online, cops are kept well informed about what’s going on around town and can easily access police databases from anywhere.

Because these communications systems are considered the life-line of the police car, agencies usually go for the most durable, versatile and reliable equipment available to ensure that officers on patrol always remain in touch.

The Rumbler is an additional, low-frequency siren that’s designed to prevent crashes as police respond to emergency calls. Officers activate it when they approach intersections or are hurrying to a crime scene.

It sounds more like a bass, so motorists hear and feel it when a police cruiser is coming up on them with the sirens on. Officials say the Rumbler is more noticeable to drivers, and the contrast of high and low siren tones does a better job of catching a distracted driver’s attention.

Bass tones also do a better job of penetrating modern car cabs that are designed to keep road noise out, making it more likely for the driver to notice the approaching cop car and get out of the way. This is especially important at intersections, where more than 50% of all fatal crashes and crashes with injuries happen.

It sounds like something out of a Bond film, but StarChase is something that real law enforcement agencies are using to track down the bad guys while keeping everyone else on the road safer.

High-speed pursuits kill nearly 400 people a year, racking up bills for damages, lawsuits and medical expenses that end up costing the government about a billion dollars a year. This new GPS technology is trying to change that. 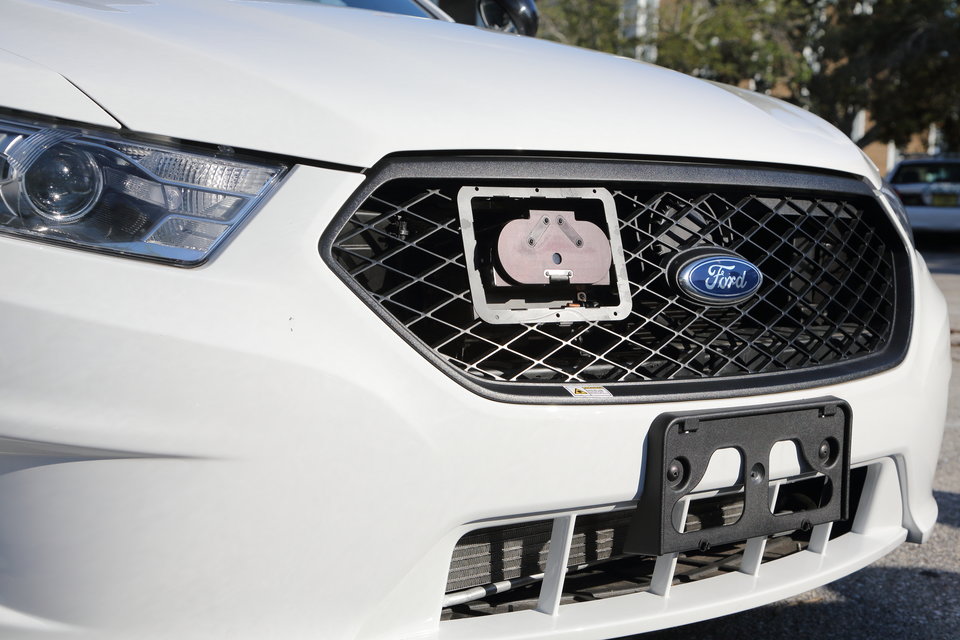 StarChase is retrofitted into the cruiser’s front grill, and during a chase, the officer fires the two-and-a-half-inch projectile GPS tracker which sticks to the vehicle on the run. It lets cops track the suspect and find out where they went without having to recklessly speed through red lights and stop signs – keeping the officer and public safer.

About 50 cities across the United States are using the tracking technology. The StarChase device itself costs about $5,000. The projectable GPS units that stick to the fleeing vehicle are $500 each, but they’re reusable when recovered.

Law enforcement has embraced modern technology to keep pace with society and its criminal underbelly.  To see how our technological advancements can help you and your team get the job done, contact us to schedule a free demo.

And check out how fire trucks have evolved over the years.