The FMCSA has released the final rules for Hours of Service regulations, with major changes that experts believe will be popular with drivers and fleet operators. Officials say the new rules provide more flexibility for drivers without compromising safety.

The changes were made after the FMCSA received feedback from members of Congress, fleet operators, truckers and other industry members. During those public hearings, participants said that the current HOS rules were too restrictive and needed to be more flexible.

“These updated hours of service rules are based on the thousands of comments we received from the American people. These reforms will improve safety on America’s roadways and strengthen the nation’s motor carrier industry,” said FMCSA Acting Administrator Jim Mullen.

The new rules go into effect in early September - they become official 120 days after the final HOS requirements officially go on the books.

What Changes were Made to the Final HOS Rules?

The FMCSA made four key changes to existing HOS rules when implementing the final rules, without changing allowable maximum driving times, based on the comments submitted by thousands of participants. 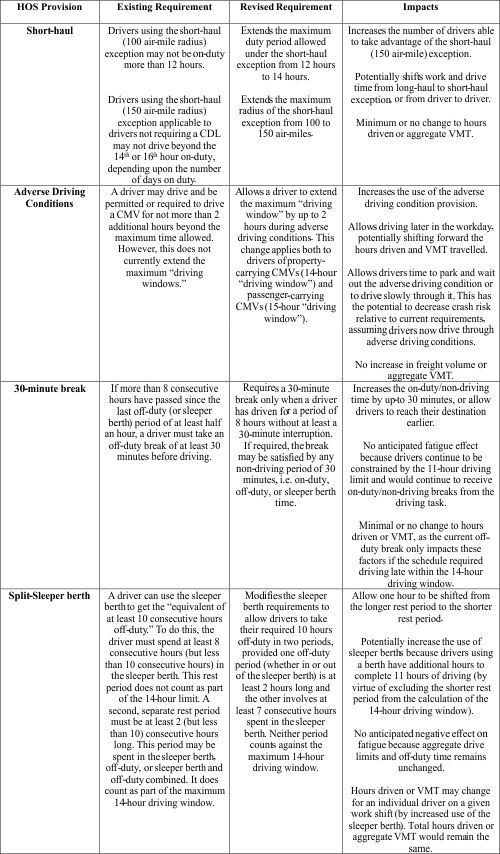 In addition, these modernized hours of service regulations are estimated to provide nearly $274 million in annual cost savings for the U.S. economy and American consumers. The trucking industry is a key component of the national economy. It employs more than seven million people and moves about 70 percent of the nation’s domestic goods.

What is Forward Thinking Doing to Prepare Customers?

We here are Forward Thinking Systems are making sure these new rule sets are accounted for in our FMCSA-registered ELD.

Our programmers are currently working on updating the rule sets in Field Warrior® and will be ready before the rules go into effect later this year. The only thing you will have to do is update your app once the software update is ready. We will be sure to let you know when the updated app is available.

If you have any questions or concerns about the rule transition and how it will affect your current solution, please contact us. You can also check out our ELD Resource Center for more information.