What it Took to Design a Compliant Electronic Logging Device Solution

The MAP-21 law – and the ELD rule included in it – created a massive ripple effect across the transportation industry; forcing companies, law enforcement agencies, and support operations to take on a new, immense challenge with a ticking deadline. Now that it’s been fully implemented, some companies are still struggling to get their ELD solution on track.

The ELD rule created a streamlined program to reduce crashes, injuries and fatalities involving large trucks and buses by:

The ELD rule was designed to make sure truckers comply with federal hours-of-service rules that limit a driver’s workday. The new rule:

An ELD (Electronic Logging Device) automatically records a driver’s driving time and provides more accurate hours-of-service (HOS) records to inspectors. Carriers who once used paper logs or logging software had to use ELDs by December 2017. Carriers who used AOBRDs had until December 16, 2019 to install ELDs. The ELD rule is now being fully enforced, and authorities have warned that there will be no soft enforcement period for this last deadline. 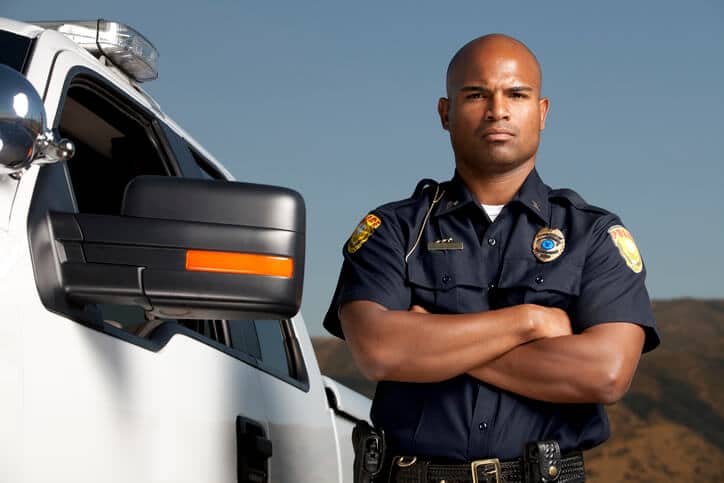 There aren't many excuses you can use at this point, and "I don't wanna" doesn't hold up in court.

There Have Been Bumps in the Road

Now the ELD rule is fully implemented, anyone who tracks their hours of service and isn’t exempt from the rule must have an ELD installed in their vehicle and be trained on how to properly use it.

However, there have been some issues as operators and ELD providers scrambled to meet last month’s deadline. Omnitracs had to ask some customers to use paper logs starting back in November after a “GPS rollover event” interrupted service for some of its in-cab devices. The ELD rule allows drivers to revert back to paper logs for up to eight days if their ELD is malfunctioning.

Just a few weeks ago, one of their major clients, Baylor Trucking based in Indiana, reported that when Omnitracs pushed out a firmware update for its ELD devices, the company lost connectivity to about 10% of its fleet. The company says that the blackout had an immediate impact on its operation; with driver calls flooding in to see how many hours they had left on their duty clocks. Omnitracs had to have the client reroute vehicles to service centers or home terminals so a software patch could be installed using a flash drive.

Another ELD provider, Trimble, also had to request an extension to the FMCSA’s eight-day ELD repair requirement this month, as the company works to update their devices after they malfunctioned when the date changed to 2020. Customers were reporting a high number of outages, along with sluggish login times and some other system malfunctions. The problems were linked to the new calendar year switchover. The server clocks and the systems’ GPS did not sync up, causing the devices to continuously reboot.

Another major ELD manufacturer that attracted customers with its "no monthly fee" promise announced that it was permanently shutting down its operation. ZED Connect announced on its website that they were "phasing out" their Cummins-backed ZED ELD product, and gave its customers until the end of January 2019 to find a new ELD provider. The FMCSA also keeps a list of revoked ELDs on their website.

Creating a Reliable ELD was a Massive Undertaking

Developers at Forward Thinking Systems had their own share of issues to deal with when the devices first went online two years ago. Because of the enormity of this project, they say it’s not surprising that other companies have run into issues along the way.

“It’s really trial by fire,” said Stuart Lowenstein, a principal at Forward Thinking Systems. “There were so many different variables and so many different specs. It was a bit rocky in the beginning, but now that we have stabilized it, we are able to immediately address any issues if they come up. It's a solid piece of software that is serving our customers well.” 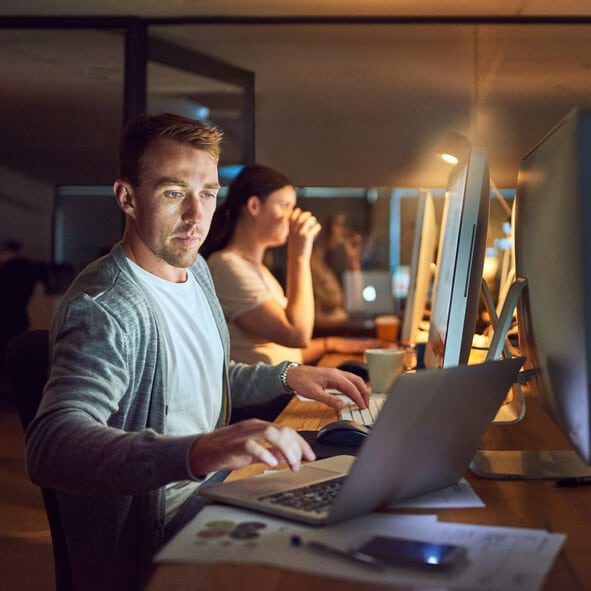 Creating ELD software looked a lot like this, but with more coffee and yelling.

One of the most difficult issues that faced developers during this process was understanding exactly what was required of them to meet the new ELD rules. “There are so many requirements that were put on the books,” said Lowenstein. “There are still some gray areas. You can’t just read the specs and know exactly what the rules are, or know if something was later changed. This project almost required that every fleet and every ELD development company train or hire an ELD rule expert. It took someone working full-time to decipher all the specs and track the changes that came out."

There were addendums and exceptions that were later added because companies began to develop their ELD solutions and challenge some of the requirements. The FMCSA would then clarify or amend the regulations.

"For instance," Lowenstein said, "one of the rules said you had to be integrally connected to the device. We originally thought that meant you needed a wire, so we created our first solution, the FTS Link cable. However, then officials said Bluetooth was alright to use, and things evolved from there.”

Now, the FMCSA says that ELDs must be capable of sending logs to a safety official via wireless web services and email or through a thumb drive and Bluetooth. Drivers also have to be prepared to show officials the ELD’s display, or have logs printed directly from the ELD.

“Our ELD solution utilized the telematic type, so drivers and managers can transfer logs to officials using web services and email,” said Albert Fazio, the Quality Assurance Manager at FTS. “Managers can send logs to the FMCSA by using the ELD Dashboard in IntelliHub® and drivers can use our Field Warrior® app to transfer data while they’re in the field. We try to make it as simple as possible to use and understand.”

Anthony Baugher, currently the Director of Operations at Forward Thinking Systems, was on the other side of the phone when the first round of ELD rules went into effect in 2017. His former trucking company was using the grandfathered AOBRD setup in their vehicles, which were allowed until December 2019, and had made sure all of the devices were compliant with the new rules.

"This rule was so complicated, we had drivers getting pulled over who had to explain to authorities that their AOBRD was grandfathered in," Baugher said. "We had to reach out to Forward Thinking Systems to get the statute printed on a card that they could hand to officers who were unaware of that portion of the law."

"Between the outside consultants, the internet, the FMCSA resources and law enforcement, the only guiding light I trusted was from Forward Thinking Systems," Baugher continued. "As a former customer, I relied on Alf and Stuart as my ELD specialists. They answered all the questions I had."

The Road Less Traveled Was Better for Customers

“We created a lot of work for ourselves when we decided to build an ELD solution with a BYOD option so customers could use their existing smartphones, tablets, and Garmin devices,” said David Isler, the CEO of Forward Thinking Systems. “We did it though, because we knew it was the right choice for the customer. This would be more convenient and save them money. That made more sense to us.”

“Making sure our app was compatible with the various types of devices was complicated,” Lowenstein said. “We had to make sure our specs all matched and that our solution would work properly on all of them. It took a lot of testing and a lot of extra time to get everything lined up properly. Now that it's up and running, it's great, but getting here was no easy task."

“While having one canned option with our own hardware packages might have been easier for us as developers, it wasn’t the right answer for our customers,” Isler added. “They needed a solution that fit their needs; not ours.”

Creating an ELD Solution was a Team Effort

At the height of the ELD project, Forward Thinking Systems had about a dozen team members working full-time on its development and testing.

“It was a difficult process that required a lot of man-hours,” said Fazio, who helped oversee product testing during the ELD’s development. “We tested across several different JBUS devices, cables, interfaces using different vehicles. We tested our program against every requirement the FMCSA laid out before us.” 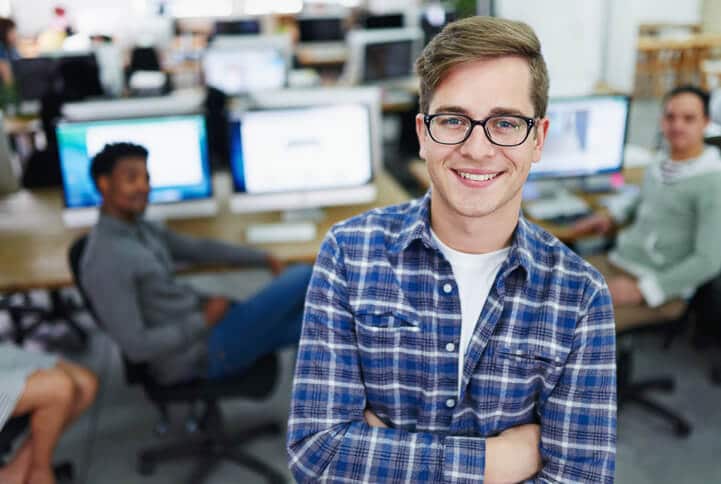 "Oh this app looks great! Let me break that for you." -Forward Thinking Systems QA team

“It took a great deal of effort to make sure we could connect to the devices, report malfunctions, track diagnostics, things like that,” said Lowenstein. “It was a lot of development and testing. It was, by far, the product with the most details and different types of situations we were dealing with.”

“Our team did a tremendous job of pulling together to handle this monumental task,” said Isler. “I’m proud of what we were able to accomplish with our Field Warrior ELD solution. We are always striving to improve our customer’s experience, and they know that by using our ELD solution, they are able to pass roadside inspections and comply with federal regulations. We offer them some peace of mind.”

Once the team was able to work through the specs, develop the program and thoroughly test it, Field Warrior® ELD was registered with the FMCSA and made available to customers. The app can be downloaded off of Google Play and used on Android phones and tablets.

Developers have also continued to add and refine features, such as the ELD Dashboard and the new Kiosk app. “It took a couple of revisions to get the solution exactly where we wanted it,” said Lowenstein. “We first released Field Warrior ELD version 3.0, and now we are up to version 4.0.740. I’m happy with the product we have out there now, it’s reliable, it’s compliant, and it meets our customers’ needs.”

The updated ELD Dashboard lets supervisors track and manage driver HOS logs. “The ELD Dashboard breaks down all the logs by date and driver, with a search tool that's easy to use,” said Fazio. “Managers can review and edit duty status logs. They can add or edit shipment information. They can send information to an investigator for a group of drivers during an audit. The dashboard helps dispatchers and drivers stay compliant."

Drivers have access to a similar portal on their mobile app, where they can edit, approve and send logs themselves.

Meanwhile, the new kiosk app helps customers operate smoothly and can be used by workers who need to log duty hours but aren’t working in a vehicle. For instance, a computer can be set up to allow warehouse workers to login and track their hours without having to assign the logs to a truck or vehicle. The new app makes it easier for workers to comply with HOS requirements while keeping operations running smoothly.

"It's all about ease of use," said Isler. "We are focused on delivering the best customer experience we can. It's what sets our solution apart from the other ELD options out there."

If you’re unhappy with your current setup and looking for a new ELD solution, shoot us a note or give us a call. A helpful human can answer your questions and set you up with a free demo. See for yourself how Forward Thinking Systems can help you stay compliant, organized, and ahead of the other guys.